If you are confused about what hardware to use for your gigs and recording sessions, then you should spend some time on this article. Our veteran performer Matt Bell will guide you from the basics to the pros and cons of the products on the market.

You’re in your practice room working on your scales and etudes. The phone rings. Someone wants to hire you for a job. They say the client will provide PA. Just bring your own pickup or mic. (record scratch) What? Pickup? Mic?

Increasingly, paying jobs are requiring string players to amplify. Venues are getting bigger or noisier and need the string players to be louder. Video crews want a clean recording of the music to document the event better. Social media sophistication is increasing and you need higher quality audio for your platform.

So which one is better – a pickup or a mic? It depends.

Pickups and microphones have pluses and minuses. Understanding those will help you decide whether you need a pickup or a mic in any given situation.

First, we must understand how your violin works.

Those vibrations are transferred through the sound post to the back plate of the violin. The back plate and top plate both vibrate, causing the body of your violin to expand and contract. The vibrations of the top and back plate literally pump air in and out of the f holes. The body of your violin is a physical amplifier. It takes the vibrations from the strings and makes them louder. It’s not a linear amplifier, though. It doesn’t amplify every frequency the same amount. Some frequencies are emphasized while others are de-emphasized. Every step in the process matters. That’s why the strings, the bridge, the top plate, the sound post, the back plate, and the f holes all affect the sound of your instrument.

Because a microphone captures the vibrations from the air coming out of the f holes, it takes advantage of the entire system. That’s why microphones can give the most natural sound.

Ｗhy on earth would we ever use a pickup?

So if a microphone sounds more natural, then why on earth would we ever use a pickup?

In an ideal situation – a recording studio or a concert hall – the violin is the loudest thing in the room. You can place the microphone 2-3 meters away from the violin and capture the “bloom” of the sound and the acoustics of the room. 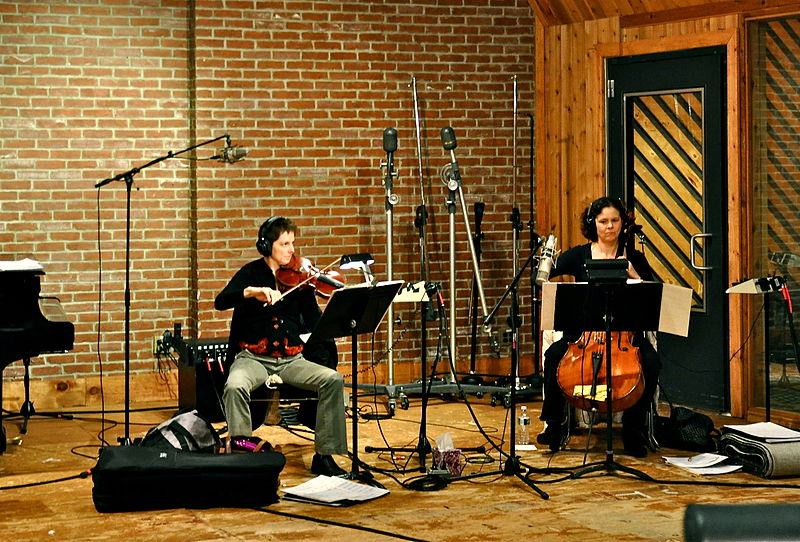 But we seldom work in ideal situations. Dishes could be clattering during a dinner set. A crowd could be talking during a wedding cocktail hour. A horn section could be playing right behind you in a dance band.

In a loud room, we can “close mic” the instrument. The closer we place the microphone to the instrument, the better “signal to noise” ratio we get. Imagine that you’re in a noisy room and you’re trying to hear your instrument better. What do you do? You put your ear as close to the f hole as possible. We can do the same thing with a microphone. The sound quality changes, of course. What you hear with your ear a few inches from the f hole is not what your teacher hears 2 meters away, is it? The sound made by a violin needs a little bit of space to develop. But in a moderately noisy environment, placing the microphone closer to the violin allows us to get the best possible signal, all things considered. We’re already starting to think about trade-offs.

If we’re trying to record a musical ensemble in an ideal situation, we’d put a microphone in front of the ensemble and capture the sound of the entire ensemble at one point in space. But if some of those instruments are much louder than the others, we would want to position that microphone farther from the loud instruments and closer to the quieter instruments, right? In fact, we might even want to put separate microphones on each instrument so we can turn one up and another one down to create a good blend or “mix”. Suppose we want more violin and less drums. We would turn up the violin microphone and turn down the drum microphone. This is called “multi-tracking” and it’s how the overwhelming majority of music is amplified or recorded today.

But what if the violinist is right next to the drums? The drums could be as loud in the violin microphone as the violin is (or louder). This is called “bleed”. The drums are “bleeding” into the violin mic. Turning up the violin would ALSO turn up the drums. We wouldn’t have good “isolation”. Without good isolation, you can’t get a good mix. You might have a nice, natural violin sound, but you also have a nice natural drum sound in that same channel and, therefore, have no control over the mix.

This is where pickups come in.

Pickups provide a slightly less natural sound, but they provide significantly more isolation. A bridge pickup on a violin can “hear” the violin MUCH better than it can hear the drums that are nearby. So if you’re in a situation where the ambient noise is loud enough that increased isolation is necessary, then it’s time to switch from a mic to a pickup.

We should also talk about feedback. We’ve all heard feedback. It’s the high pitched squeal or the low roar that comes when a transducer starts to “hear” its own amplified sound and a positive feedback loop is established (hence the name “feedback”). 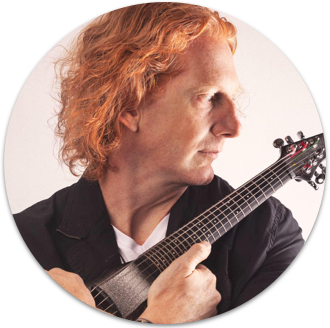 Matt has started playing classical violin at the age of 3. As a teenager, he discovered rock and roll and began to explore the collision of those two worlds. After 20 years of touring all over the world, Matt have developed his own unique style. His latest project shows that VIOLINS CAN ROCK!

Matt has started playing classical violin at the age of 3. As a teenager, he discovered rock and roll and began to explore the collision of those two worlds. After 20 years of touring all over the world, Matt have developed his own unique style. His latest project shows that VIOLINS CAN ROCK!

New wireless microphone with EPIC pickup that makes tone switch so easy. You can achieve classical or folk sound at will.

Simply place the mic near an F-hole for focused tone and minimized feedback.